The Benefits of Using American Sign Language with Preschoolers 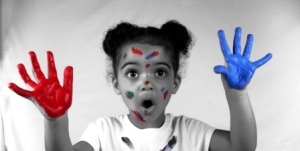 Every parent knows that young children love movement and actions. When you sing songs and put actions to them, children always want to perform those actions. For example, when you see a child singing The Itsy Bitsy Spider he or she automatically starts making the motions of moving the spider up the spout and having the rain fall and wash the spider out. Actions help children remember the words to the song because there is muscle memory involved. The more senses involved in learning; the greater memory retention the child will have.

Research has demonstrated repeatedly that children retain what they learn through fun, engaging activities that encourage the use of Gardners seven multiple intelligences:

The use of American Sign Language (ASL) is a perfect way to supplement any preschool curriculum because it can be used with all of the multiple intelligences. In linguistic intelligence you always speak while making specific signs so students are being exposed to two different learning modes for one word.

With logic-mathematical, children can see a pattern of language and how it forms. Musical; you can add signs to common music or rhymes that the children already know. Bodily-kinesthetic; our hands are moving to make the signs so children can feel the words or letters.

Well-known people are also beginning to realize that it is the early years of life that are crucial for future success. Laura Bush has stated that, The years between diapers and the first backpacks will determine whether a child will succeed in school and make it to college. First Lady Bush addressing the Senate Education Committee on January 25, 2002. Hillary Rodham Clinton asked physicians to suggest parents read to their young children, and she called for greater investment in children aged zero to three. (Lee Hochberg, 1997)

Children need a strong foundation to build on. We need to start educating and teaching our children at a very young age. Instill the love of reading and learning in them early so that it will stay with them throughout their lives.

When children are taught English and ASL together they are processing language using both sides of their brains. They process verbal sounds on the left side of the brain and ASL as pictures and images on the right side of the brain, giving them two places to recall language from.

So, if language is an essential part of childrens development, and the use of multiple intelligences is important when teaching, it is the next logical step to include the use of ASL in the preschool curriculum. When ASL is used in combination with spoken language it reinforces the learning of educational concepts such as ABCs, animals and other specific themes. Research shows that children find signing fun and it includes them in their learning process.

Dr. Marilyn Daniels, professor at Pennsylvania State University, designed a study with 16 hearing preschoolers who knew ASL. All but one of the children had deaf parents. She found they scored 17% higher on the tests she administered than hearing children who didnt know ASL. Subsequent research studies with larger groups have found the same results. (Daniels, 2001)

I have a colleague who is Deaf and has a hearing son who is now in kindergarten. Her son began to read when he was 3 and a half. In kindergarten, his class reads a series of books measured by difficulty. Most children in his class are on levels A and B; while he is sailng through levels M and N. The school has since placed him in a gifted program with older children for reading so he doesnt get bored. His mother attributes his reading success to signing while young, as well as learning the manual sign language alphabet at an early age.

ASL is such a beautiful language and can greatly benefit our preschool-aged children. I would like to encourage everyone to use ASL with young children to compliment their existing programs, be it in a library, daycare, preschool or at home.

Laura Berg is the founder of Smart Hands Baby Sign Language in Toronto, Canada and a certified teacher with degrees in Sociology, Child Studies, and a Master's degree in Education. Upon welcoming a newborn of her own, came the realization for the possibilities of sign language boosting her daughter's cognitive development.

One of Laura's passions now - sharing this wonderful and eye-opening realization of benefits with other parents. Her baby sign language classes are engaging and a delight for both parents and baby, while offering parents the tools they need to facilitate early communication with their little darlings.