Looking For a Step-by-Step Way to Learn Baby Sign Language?

British Sign Language became recognized as a language as a result of changing attitudes due to American research on the benefits of sign language.

Now BSL has come unto its own and reflects the United Kingdom language. This means BSL uses a vocabulary that models the cultural British vocabulary.

Sign languages rely as much on the movement of the hand in forming gestures as it does the individual words. When signing sentences, the order of words is not always identical to how they are written. This concept is one reason why sign language works so well with infants who cannot form grammatically correct sentences yet.

British Sign Language for babies also sometimes uses a form of sign language called Makaton. Makaton is a sign language that uses more than just gestures. It also uses eye contact, body language or even speech in conjunction with gestures.

It can be useful to teach children with communication problems. But like American Sign Language, standard British Sign Language for babies works best. Also like ASL, the British uses a few home signs that reflect personal communication within the family. But the biggest difference between any signed language is the fact that each country has distinct cultural and regional dialects.

For infant signs, BSL works as effectively as ASL to enable infants to communicate before they can speak. British Sign Language is a recognized language. Teaching infants with BSL is the same as teaching infants using ASL. Just be sure to start slowly with simple words for recognizable objects. Use a variety of activities to reinforce learning such as songs and books. But most of all, be patient. And as always – have fun! 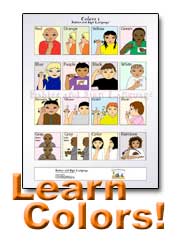 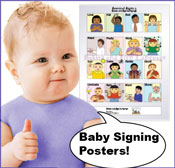