"Is there research regarding the effect of a downs child
learning sign language and how learning to sign may delay
the child's acquisition of verbal language?" --Sherry 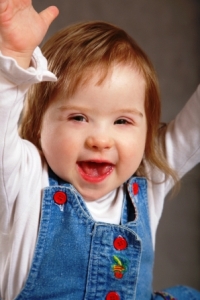 Thank you very much for your inquiry about babies with Down Syndrome learning baby sign language. Sign Language actually helps babies, toddlers, and children with Down Syndrome by improving their communication skills. I asked a knowledgeable source on this.

This is what she said:

I saw your question at my blog (www.sarahlynn.blogspot.com) and wanted to respond.

Most kids with Down syndrome have speech delays, and quite often their expressive language is slower to develop than their receptive language.

This can cause a lot of frustration for the children and their parents, as the kids can't communicate as effectively as they'd like, and this stage might drag on much longer than for a typically developing child.

Each of the speech therapists we've worked with has actively encouraged signs in the early years, along with traditional speech therapies.

My daughter, now 3, often uses her signs for emphasis, or to clarify when we don't quite understand her spoken words.

Here is more information about babies and children with Down Syndrome and the positive effects of learning sign language with significant results.

"How Manual Sign Acquisition Relates to the Development
of Spoken Language: A Case Study"

The relationship between signed and spoken word was observed in a young girl with Down Syndrome during a treatment regimen using simultaneous input.

All of her words were recorded over an 8-month period and classified according to the manner of speech and communication production (i.e., spontaneous/imitated; signed and/or spoken).

Several ideas and themes were demonstrated with specific words (ex: signs to speech), and sign/spoken developments during the first versus the final four months of the research study. It was concluded that use of simultaneous signs supports the formation of spoken language.

And for more research/information on Down Syndrome and American Sign Language, please see:


Return from "Down Syndrome and Sign Language"
to "Baby Signing" Startpage