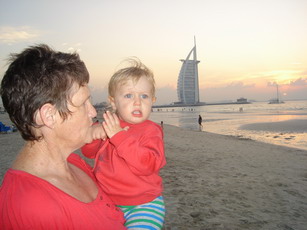 Baby Signing was something I had never heard of until I flew to Dubai to stay with my daughter and son in law and to delight in my young grandson, Jamie.


At eighteen months, Jamie was saying recognizable words and beginning to string phrases together. I wasn't impressed that my daughter had also encouraged him to learn baby signing, feeling that it would create problems with laziness around speech.

Because of the nature of their expatriate community, I had the wonderful opportunity to meet with mums and babes from many different countries.

Of course language then becomes very interesting, as many of the babies were being taught the language of their parents' country of origin.

This meant that many of the babies were unable to make themselves understood. Or so I thought!!

A young Danish mother, who had befriended my daughter, asked us if we would look after her child one afternoon. This will be interesting, I thought, as her child only spoke Danish.

Was I surprised to discover that Maia had mastered sign language so completely that her communication with my daughter, knowing some of the signs, could communicate clearly with her. I was the one who trouble conversing with her, and quickly saw my need to learn baby sign language.

My grandson, who had quickly picked up some of Maia's signs, particularly the ones for eating, drinking, saying thank you and asking for more, enjoyed "speaking" to her with baby signs.

We had a wonderful afternoon together and I became a convert to signing for babies.

I later met up with a Norwegian infant who was able to communicate with me quite clearly through infant signing, and felt proud of my ability to have a conversation with her through our talking hands.

Jamie is now an able speaker, but he often signs for more, please and thank you.

I am completely won over by baby sign language, having first doubted the need for it, and would heartily endorse its use.