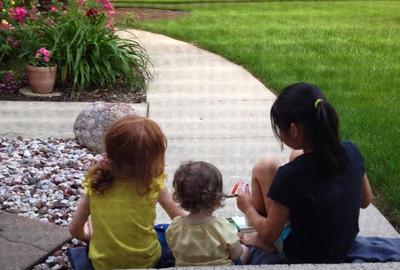 I have read so many articles about the benefits of signing for many different populations: infants, children, those with special needs, those desiring advance communication skills, frustrated toddlers who do not have the muscle development to communicate orally, and the list goes on and on. For years, however, I never really thought it was worth the all hassle. I had already raised two boys quite successfully without it and my own parents survived the toddler tantrums without knowing a single sign themselves. But then I encountered a unique situation that, up until that time, I had never heard addressed: Adoption.


The world of adoption brings so many challenges on so many different behavioral, relational, physical, social, emotional and developmental levels. Children have to quickly assimilate within a brand new environment where very little may be familiar and very much may be frightening. They need a reliable means of communication that can be learned quickly and used immediately to begin the process of becoming secure and confident in that new environment.

We had the tremendous blessing of bringing our oldest daughter home from another country rather than from the hospital as her siblings had been. She was 2 ½ at the time, quite well versed in Cantonese and loved to talk, play and yell with her adult and child friends. She had become quite accustomed to her Social Welfare Agency (the title of group homes or orphanages in China) and even was viewed as the “little momma” of many of the other children – a title which she loved and fulfilled well. She had no interest in leaving her “charges” to go away with a white, blonde haired stranger to travel to a land with strange noises, odd smells, an unintelligible language and weird customs. We had a lot of ground to cover to get from hated stranger to trusted roommate and an entire abyss before we reached “loved family”.

I read research that said adopted children all feel separated and segregated at some point in their lives even if they never leave the country they’re born in and the language they heard in the womb. Some need to have anything familiar to hang on to regardless of how small. So we attempted to learn Cantonese to comfort her which proved to be nearly impossible for us Americans. I tried some phrases, but they never turned out to be the thing that grabbed her attention. (My pronunciation must have been horrific) I learned some popular Cantonese lullabies, brought with a Sesame Street video all about China (featuring a Chinese girl), and I learned baby signs and brought Baby Signing Time videos.

Signing is wonderful for small children because most of the gestures at the baby level are comprised of miming the action you are doing. Children can instantly understand and even view the activity as a game. Another benefit is that we tend to slow our speech and repeat things more often when we pair signing with talking – both benefits to understanding and trying to create new sounds. Children are able to express rather quickly what things they really enjoy and would like to do again or can be abundantly clear when something they encounter scares them or is simply uninteresting.

The combination of signing along with the videos we brought (which featured small children signing) really helped my daughter communicate quickly. Within 10 days, she had 16 working signs she was using continually while only able to attempt 1 or 2 English words. She could tell us within the first day when she was hungry, thirsty or wanted to watch another video! She tended to “shut down” whenever she was insecure, but she could sign confidently in her lap without ever having to look up or visually interact with anyone until she felt safe. We were able to find out within less than 48 hours that our daughter’s favorite things were eating fried rice or sausage and riding in the stroller. We also learned that she hated the highly recommend baby carrier I had spend lots of time and money researching and purchasing. However, the fact that she could tell me that, was worth ten times the cost! She was also able to attempt some English sounds and was cautiously able to mime and whisper “fish” as her first word only a few days into our relationship as we watched the koi swimming early one morning in the lobby of our hotel.

Children of adoption can feel instantly more secure when using sign language – much more rapidly than waiting to comprehend and then form and produce new sounds. They can understand the actions more quickly as they logically relate to the mimed activity more than the abstract sounds of a foreign language. They can gain confidence by looking directly into a trusted adult’s eyes as they sign which may increase the feeling of security. When adults slow their speech to match with their signing, it gives children the ability to distinguish the sounds more clearly and follow the muscle movements of the lips, tongue and face. Other adoptees, like my daughter, however, may feel shy or fear looking at or speaking directly to adults. In these situations, signing allows them to communicate while not feeling forced to talk if they are scared to do so - allowing them to stay safely secluded and protected within themselves. This can help them feel more in control of their experiences and come “out of their shell” more quickly.

Signing has become a major part of my entire family’s life now. My parents began learning to sign once we returned from China and they continue to use it with any new little ones that join our clan. One of my sons, aged 14, and adopted daughter, now 10, continue to sign with me and enjoy it as a “secret” language none of their friends know (or to “whisper” secrets behind dad’s back!). When their sister was born, we began signing with her while she was still in the hospital and she began to sign back with an enormous vocabulary by only eight months! She was very advanced and not the typical scenario, but our conversations at such a young age showed me how tremendously much goes on in a baby’s head that we are missing out on by not taking time to help them display it by any means possible. Currently, my youngest daughter, 21 months old, is only beginning to sign back to me, but demonstrates understanding when things are signed to her. She’s on the opposite end of the spectrum and is taking longer than most children to try signing herself (this makes sense in her case as she is delayed in other developmental areas as well).

I love the parent-child relationship and the job we parents have of trying to be the best student of our children that we possibly can be. We have the privilege of being the first ones in their lives to really want to hear what they have to say and understand what they’re thinking and what excites them. I sure hope you chose to “hear” what your child is trying to say at as young an age as possible. After five kids and trying all sorts of “techniques” – just listening and helping them show what they already know is the best route to happiness and communication that I have found.

Join in and write your own page! It's easy to do. How? Simply click here to return to Get $25 Off - When Writing Article for Babies and Sign Language Site.