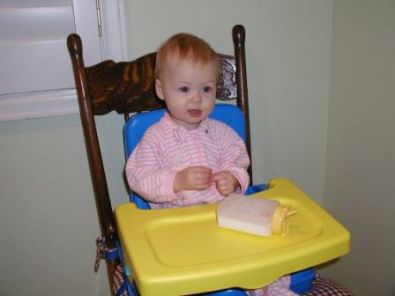 I started teaching my daughter baby signs when she was about 7 months old. At first I got frustrated at first because I didn't seem to be getting any positivefeedback from her. Finally, when she was about 10 months old, she started doing the sign for "light", which I hadn't taught her until the day that she started signing it. She loves to do the sign "light" and at 13 months,still does it all the time. Once she started signing "light", it was only about two weeks until she started doing five more signs: "dog", "milk","eat", "bye-bye", and "snow." By eleven months, she had really gotten the hang of signing and I was so happy that I had stuck with it.

Doing baby signs with Meredith has been such a wonderful experience for both of us. It's been wonderful for her because she's able to tell me what she wants. The first time she did the sign for "milk" and I responded by going to the refrigerator to get her a bottle, she lit up and had the biggest smile. It's been wonderful for my husband and I because we've enjoyed having a window into her world, realizing how excited she gets to be able to tell us something and it has greatly reduced the frustration level for us all.

Now, at 13 months, Meredith has about 12-15 signs that she uses consistently. The skeptics in our family that were unsure about baby signs are now just as excited as we are when they see Meredith signing. Teaching baby signs is a lot of hard work and takes a lot of patience and consistency, but the rewards are immeasurable. --Elaine 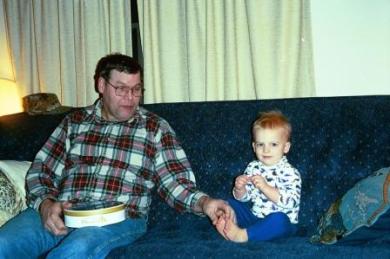 I began signing some words to Caleb when he was about 7 months old. We started with ‘eat’ and ‘more’ (two VERY important concepts to a baby). He got ‘more’ first around 10 months, and picked up ‘eat’ shortly thereafter. I have tried other signs with him, like ‘water’ which he does alright with, and ‘ice’ which he didn’t pick up at all (he thought I was saying “eyes” and pointed to those).

He gets more verbal every day and often says “mo” as he signs ‘more’, “ee” as he signs ‘eat’, “buh” as he uses our home sign for peanut butter (one finger making a “spreading” motion on the other palm), and many other words accompanied by pointing.

I had prior experience with sign, and it seemed very natural to me to use it with Caleb. My mother-in-law was very against the idea at first, because Caleb is a “normal baby” and can hear well. I am happy to say that she also appreciates his signing now. It is so easy to tell when he is hungry rather than just bored.

I feel that sign gives him a means of communication that he would otherwise be frustrated by, and communication gives you power. He is happy when he can tell us what he wants. And making him happy, well, that makes me happy too.
–Deena 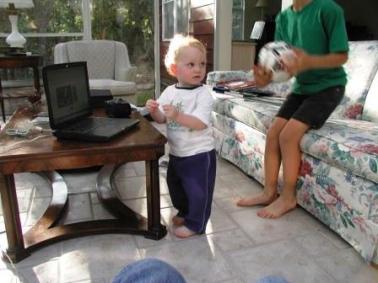 We started teaching Brian to sign when he was about seven months old, after reading Joseph Garcia's book. Within 4-6 weeks, he was signing milk.

By his first birthday, he'd added more signs, including water, more and ceiling fan. For a while, we had a hard time keeping track of all the signs he was using (I think he eventually got up to 50). At 13 months, he signed his first sentence.

I had given him a piece of apple in the kitchen, and then returned to the living room. After he finished it, he walked in and deliberately signed "more apple." We even got him to repeat it after getting out the video camera. His ability to communicate with us before he could effectively do so verbally was an amazing asset.

He rarely became frustrated, and we avoided a lot of the tantrums associated with that. He clearly realized that he was getting through to us, and I think that helped make him a very happy baby and toddler.

When we first started signing with him, family members and friends were a little skeptical; one even thought that we would delay the onset of speech. Once he started signing, though, it was so obvious that he was able to communicate with us that all the skepticism disappeared.

And it certainly didn't delay the onset of speech, he started using spoken words "on time" and now at two years, eight months, he is very verbal. In fact, after reading something that said 3-year-olds should be using four- and five-word sentences, I started counting. He regularly speaks in long sentences--one was about 15 words: "Please turn on the light in my room so that I can get my zoo.

He seldom signs spontaneously now, but if we ask him how to say a particular word "with your hands," he often remembers. He loves to watch the documentary about Koko the signing gorilla, and will sign along with her, as well as when talking about her.

The signing pictures were taken at 17 months. They show Brian signing more, milk, gorilla, and music (he was listening to music on the computer). --Katie 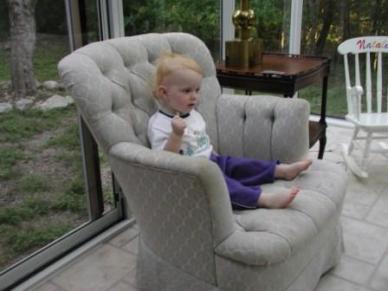 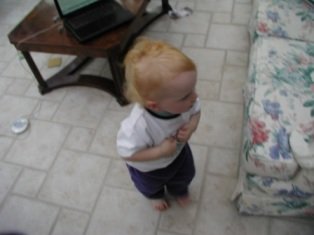 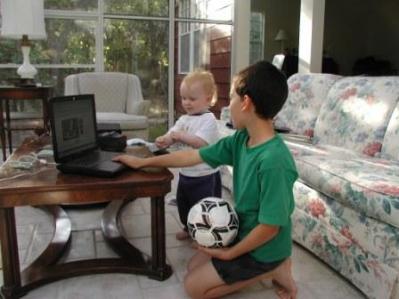 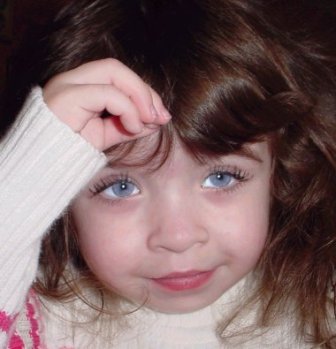 My daughter Shae Lynne is 2.5 years and has a speech delay from long term tube feedings. I have been teaching her signs for over a year and they have been the best I have done. Here are a few pictures of her doing signs that you can use.
-----------------
Shae Lynne's Signs Story
Shae Lynne was born on May 16, 2000. It was apparent from her birth that she had some sort of medical condition as she wouldn't eat, obviously wasn't growing and was throwing up constantly.
After months of struggling with these issues we finally had a diagnosis:GERD (Gastro Esophageal Reflux Disease). We had to accept the reality of Shae Lynne needing a surgically inserted feeding tube in order for her to grow and it became apparent she would not be eating on her own any time soon.
I had read much about the correlation between oral feeding and learn to speak so I knew that the motor skills developed by learning to eat solids, chewing and swallowing were very much involved in learning to form words and sounds. This would probably mean she would need speech therapy and would be a late talker. She never really even babbled much.

I had also read much about sign language and more specifically the ability of babies to learn signs before they were able to speak. I had thought several times about starting to work on this with Shae but never really new where to start and I thought it was a lot of work.

When Shae Lynne was almost two years old and only saying mama (non-specifically) we started speech therapy. Her speech therapist immediately started signs with her and encouraged me to start.

I enthusiastically jumped right in and it was the best thing I ever did. She is now just over 2.5 years and has over 100 signs in her vocabulary.

She gets so excited when she can communicate her thoughts, wants and needs with us and I can't even imagine her frustration had I not started this.

Initially I started with a few words here and there (please, thank you,help, more etc) and slowly introduced new ones as I learned them. It has been a lot of work but I am a true believer in the benefit of baby signs and think everyone should be doing it.

Why not take the opportunity tocommunicate with your child as early as possible? My only regret is notstarting them sooner with her and should I have another child in the future there is no doubt in my mind that I will introduce signs immediately.