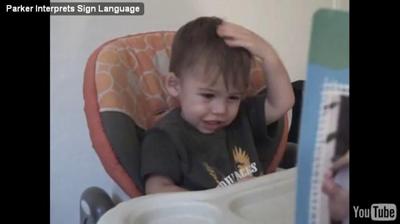 I showed Parker the SIGN side of flash cards and asked him what each was. This one was HAT.


I honestly did little research into how beneficial it was and thought it might just be a neat thing if he picked up on it.

I bought two baby signing videos not knowing how much they would change all of our lives!


Parker gave me his first sign, "More" at 10 months old. I think I made a bigger production over that than I even did the day he took his first steps!

Like any toddler, Parker will not only tell me "No!" (a tots favorite word!), but signs it as well.

He has even begun stringing his words AND signs together in sentences, like "More juice, please."

But there are still words he can't articulate well. Other children might get frustrated over not being able to say, for instance octopus, even if you don't see that frustration in a tantrum.

Who knows how that inability makes him feel about himself? With sign language, Parker can sign it without having to actually speak it.

Being able to say one silly word might not seem like a big ordeal to some, but it allows Parker the ability to communicate with me as his own person at an age when his sense independence is flourishing.

It reinforces his ability to express his likes, his dislikes, his excitement and frustrations on even the smallest level.

At some point your child will master all the "baby signs", but there is no need to stop.

We have begun looking up new words on the ASL online dictionary and I have actually begun to take ASL Interpreter classes.

I hope Parker might benefit from this later in life as a bilingual student/adult.

And don't discount a parent's learning too!

It's really convenient to be able to sign to my husband and Parker from across a room or store when I can't yell or don't want others to hear!

Beginning a baby signing program has given my son a sense of accomplishment and independence, given his parents many nights of relief, and given his Mom a new career!

Join in and write your own page! It's easy to do. How? Simply click here to return to Do You Sign with your Toddler?.